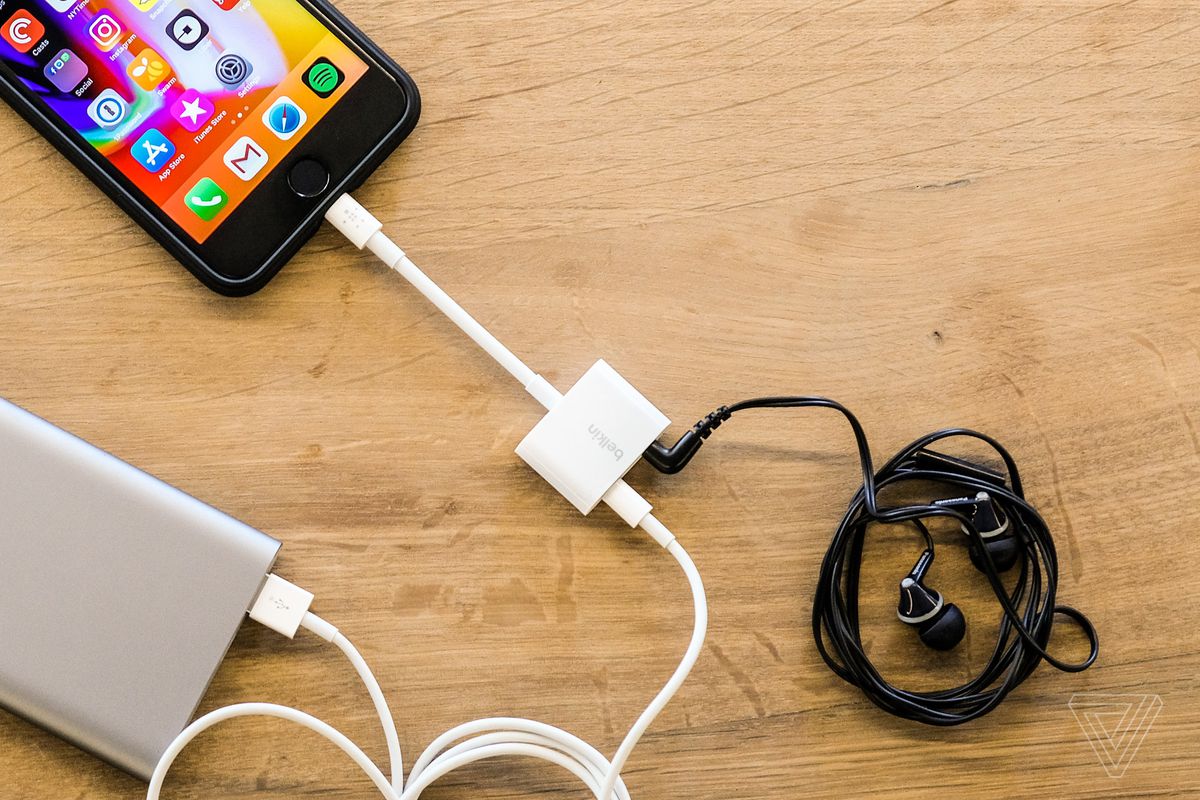 It took an entire year after the release of the iPhone 7 for Apple to start selling a dongle that lets you plug in headphones (or your car’s AUX cable) and charge at the same time. But now it’s here. Apple is just selling the thing, mind you — not making it. In September, Belkin quietly announced a new, second version of its “Rockstar” adapter that now includes both a 3.5mm jack and Lightning port. Last year’s version had two Lightning ports, so if you wanted to use wired headphones with it, you had to plug Apple’s own headphone dongle into another dongle. Going double-dongle is bad enough on a laptop, but on a phone?! Good grief.

A few days ago I decided to fork out the absurd $34.95 that Belkin and Apple are charging for this plastic adapter, which is actually $5 cheaper than the Lightning-only model. I did so with reluctance since the original product has gotten very so-so customer reviews and is often criticized for its poor reliability and unfortunate incompatibility with Apple’s own iPhone battery case.

So far, this new one is working as expected it to. The adapter does indeed allow you to listen to music through headphones and charge your iPhone at the same time. Audio performance is similar to Apple’s adapter; remember that the headphone DAC is built into these adapters themselves rather than the iPhone.

But this is a much bigger dongle than the one that comes included with your iPhone, so it’s going to look awkward and silly if you’re using it out in public. Maybe you’re someone unfazed by that! And if you’re keeping it in your car, it’s easy enough to ignore what the thing looks like. Just be aware that it doesn’t have the same level of flex as Apple’s $10 headphone adapter since the cable is thicker. I wouldn’t try bending it very far.

Unlike the version with two Lightning ports, there will be no double-dongling with this adapter. You can’t use it as a headphone splitter. Belkin notes that the Lightning connector is only for syncing and charging. If you plug Apple’s dongle or Lightning EarPods into it, nothing happens. In fact, the iPhone will keep playing audio out of its speakers until headphones are connected to the 3.5mm jack.

This also means that some Lightning accessories (like external microphones) won’t work with it, so if you’re a musician or audio pro hoping to use it as an extender for an iPad in a bulky case, this isn’t going to do that. The adapter doesn’t provide the necessary data for those devices.

I’m almost certainly going to return the new Rockstar soon. I regularly rotate through Bluetooth headphones, and even when I’ve got only my trusty (wired) $13 Panasonic ErgoFit earbuds with me, there’s rarely a situation where I feel so adamant about simultaneously charging my phone and listening to music that I would find it to be worth a $35 accessory. This in some ways the ideal iPhone dongle, but it still comes with the same side dose of indignity as other dongles. But if you’ve been stuck with a chaotic, double-dongle setup in your car for the past few months, eliminating one of those adapters might very well justify the Rockstar’s expensive price. You can find cheaper, off-brand adapters that do the same thing on Amazon, but if they don’t have the Made for iPhone seal, some of those might stop working with future iOS updates.

I still really miss the headphone jack. But I’m getting by without one. And without dongles for the most part.